Robb Report UK* has named the Bentley Bentayga as its SUV of the year. This isn’t entirely surprising as (a) it is an all-new vehicle and (b) it has a starting MSRP in the $230,000 vicinity, and we are talking Robb Report here, not Penny Saver. 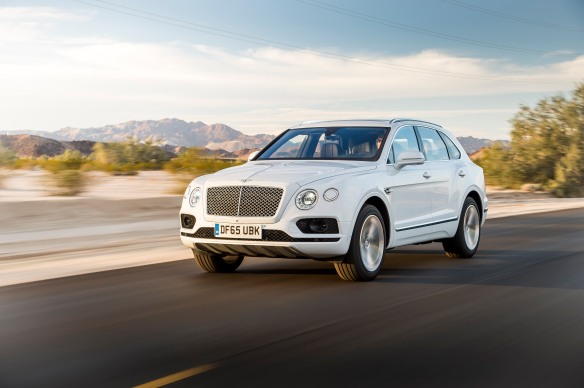 According to Erin Baker, automotive editor of Robb Report UK, “The Bentayga creates a whole new segment: the ultra-luxury SUV. It far exceeds the nature of other luxury SUVs in every respect.”

Isn’t that pretty much what “ultra-luxury SUV” means, as in exceeding luxury SUVs?  And if it creates a new segment, isn’t it the only entry in that segment?  Let’s bust out the Venn diagrams.

Then there’s Kevin Rose, Bentley Member of the Board for Sales, Marketing and Aftersales: “The Bentayga is the Bentley of SUVs.”

Well, the air up there where the Bentayga resides is a bit thin for us, so perhaps we just don’t get it.

Congratulations are in order for Bentley.  Hear-hear! or Pip-pip! or whatever the appropriate huzzah may be in this context.

*According to the Robb Report Mission Statement: “Widely regarded as the single most influential journal of living life to the fullest, Robb Report covers the newest in what matters most to its discerning and exceptionally affluent audience. Influencers and opinion leaders look to Robb Report to discover the world’s finest products, services, and experiences through both editorial and advertising,” which is notable inasmuch as it would be hard to imagine less-refined publications being quite so mercenary in its underlining the relevance of why the purveyors of the world’s finest whatever need to spend money with it in the form of advertising.